THE ATLANTIC, CITYLAB — New York City has 207 branch libraries across the five boroughs, and their average age is 61 years old. And that’s the average; at least 52 branches are old enough to remember World War I. While everyone loves a nice historical building, many of these libraries unfortunately act their age. In September, the Center for an Urban Future estimated that New York’s branches need $1.1 billion just to achieve a state of good repair. 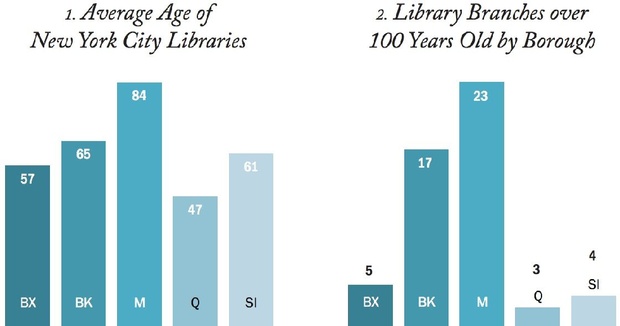 The CUF reports describes the situation as being “on the verge of a maintenance crisis.” It’s not just that the libraries are crumbling—though many do suffer poor ventilation, lack of light, water leaks, and heating or cooling malfunctions. It’s also that they’re ill-equipped for modern life. Many lack sufficient power outlets for laptops (the McKinley Park branch in Brooklyn, for instance, has no place to plug-in at all) or activity space for community events or continuing education programs.

To bolster their findings, CUF partnered with the Architectural League of New York for a study of possible designs to improve New York’s branch library system. Yesterday those concepts were released during a public showcase. Let’s take a glimpse at New York’s library of the future.

View the entire article at CityLab.com

THE NEW YORK TIMES — October 30, 2021 — If you built a laboratory solely to concoct the most inept, opaque and self-dealing election board imaginable, you would have a hard time outdoing the real-life specimen currently functioning — or…

SECOND ROUGH DRAFT — October 7, 2021 — Two weeks before the June 22 Democratic primary that everyone knew would be tantamount to the election of the next mayor of New York City, Politico New York published a story raising doubts about…

THE BRENNAN CENTER FOR JUSTICE — September 9, 2021 —“A national embarrassment.” “A disaster.” “Wins at screwing up.” These were just a few assessments of the New York City Board of Elections (NYC BOE) after its most recent in a long…

Revson President, Julie Sandorf's and Dean of the Craig Newmark Graduate School of Journalism at CUNY, Sarah Bartlett's piece "How New York City Is Saving Its Local News Outlets" was published in The New York Times on May 20, 2021.