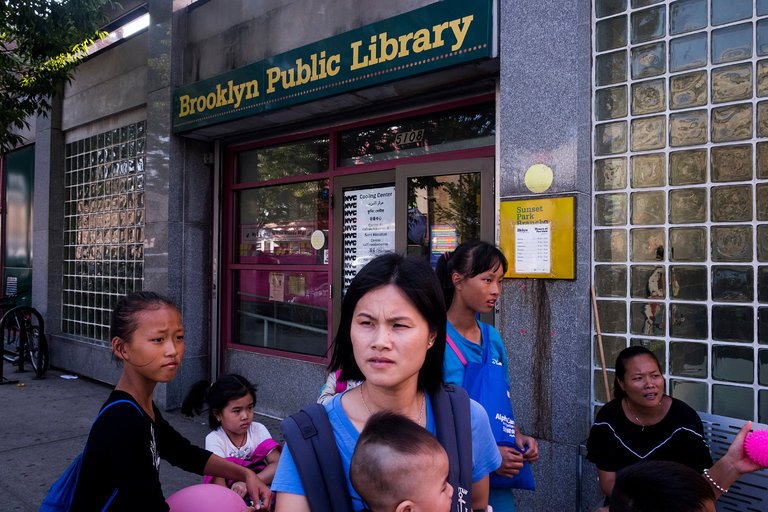 THE NEW YORK TIMES —  September 18, 2017  — For all of Sunset Park’s celebrated taquerias, dim sum parlors and picturesque piers, the most popular destination in that neighborhood might just be the local branch of the Brooklyn Public Library. Despite its squat concrete frame and fluorescent lights — a far cry from the neighboring brownstones — the library draws a capacity crowd most days.

On a recent afternoon, students from down the block and around the world scribbled out homework, studied with tutors, practiced English and honed their chess skills. On the walls, posters promoted not just reading but citizenship services and business-planning classes. Parents and children alike sat at banks of computers, indulging in a world of knowledge that many New Yorkers take for granted.

It was a hive of activity, one that actually buzzed. Four portable air-conditioners the size of refrigerators blasted air through coiled ducts. One could be forgiven for thinking the place was being fumigated, but really, the central air was broken and has been for years.

The patrons of the Sunset Park library, one of the 20 busiest in the city, are hardly alone in their love for, and frustration with, their local branch. Demand for libraries reaches new highs with each passing year (nearly 34 million visits in 2016), while many of New York’s branches are woefully outmoded (the average library is 62 years old).

New York, graced with the generosity of Astor, Tilden and Carnegie, was foundational in the library movement. Today, those foundations are crumbling. Despite their popularity, and because of it, the city’s 212 branches face nearly $1.5 billion in capital needs. And that is simply to reach a state of good repair.