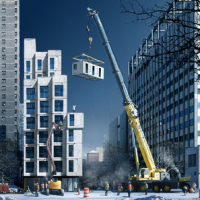 The New York Times — The apartment of New York City’s future, as the city imagines it, has all the amenities of modern life: wheelchair-accessible bathroom, a full kitchen, space for entertaining and access to a gym, communal lounge, front and back porches and a rooftop garden — all in 250 to 370 square feet.

The city on Tuesday unveiled the winner of a competition to design and build an apartment tower on city-owned land composed entirely of micro-units, 55 homes the size of hotel rooms that Mayor Michael R. Bloomberg hopes will be the first in a wave of tiny apartments aimed at addressing the city’s shortage of studio and one-bedroom apartments.

Small as it might be, the winning design was chosen for the way that it maximized light, airiness and storage space through the use of 9-foot-high ceilings, large windows, lofts and Juliet balconies.

“We have a shortfall now of 800,000, and it’s only going to get worse,” Mr. Bloomberg said during the news conference announcing the winning team, a partnership between Monadnock Development, Brooklyn-based nARCHITECTS and a nonprofit that serves creative arts professionals, the Actors Fund Housing Development Corporation. “This is going to be a big problem for cities with young people.”

Read the complete article here, and visit CHPC’s “Making Room: New Models for Housing New Yorkers” exhibition at the Museum of the City of New York.