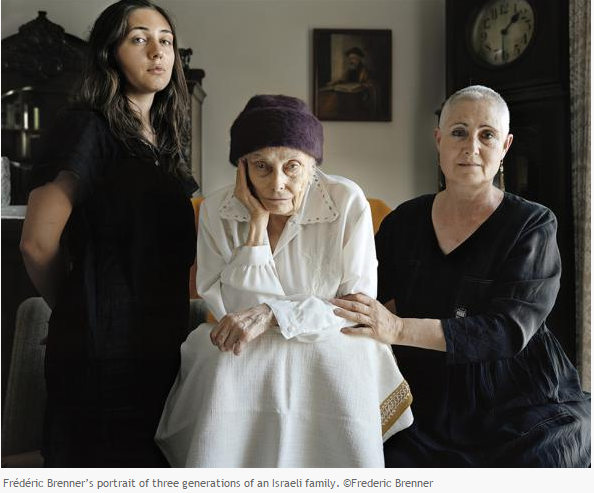 THE JEWISH WEEK — February 16, 2016 — In Israel, the light is direct, hard, strong and dense, not ideal for photographers, but it has been a place of intense picture-taking interest since the dawn of photography.

“This Place,” an exhibition just opened at The Brooklyn Museum, continues the tradition, with the work of 12 distinguished photographers from around the world.

“What I felt was needed was not more images, but a new grammar and syntax,” said Frédéric Brenner, the show’s initiator (and one of the dozen photographers) who invited the others to spend time in Israel and the West Bank and present their visions. “I came to feel that only through the language of artists could we hope to create an encounter that truly reflected the complexity of the place, with all its rifts and paradoxes.”

Some of the photos are visual poetry, like Stephen Shore’s awe-inspiring desert landscapes; others strike me as ballads, like Nick Waplington’s portraits of settlers. And other photographs give rise to silence, like “Daybreak 2011,” the one photo Jeff Wall created for the project that hangs at the exhibition entrance.

While on an introductory trip, traveling through the Negev with Israel’s leading expert on the Bedouin, Clinton Bailey, Wall came across an olive grove at sunset, as the Bedouin olive pickers were settling down to sleep outside. Behind them, a large prison with its watchtowers loomed. Immediately, Wall knew that this was a view he wanted to pursue, and he came back a year later during the olive harvest to capture the scene on film. The photographer and his assistants set up a darkroom in the laundry of a nearby hotel and worked for three weeks, shooting the scene in the early morning, in a short window of light before the light. In the photo the workers are still asleep, wrapped in colorful blankets, with a teapot and cooking implements nearby.

“I witnessed it and I didn’t invent anything,” Wall said. Throughout, the images are honest, sometimes unexpected, always thoughtful. The show projects different perspectives and different truths. Even those who think they know Israel well will encounter images and moments they’ve never seen before, furthering understanding, perhaps raising questions.

Captions are minimal, and viewers can visit the show’s website to read and listen to the photographers speak about their work and share backstories. Each photographer published a book about his or her work in the project.