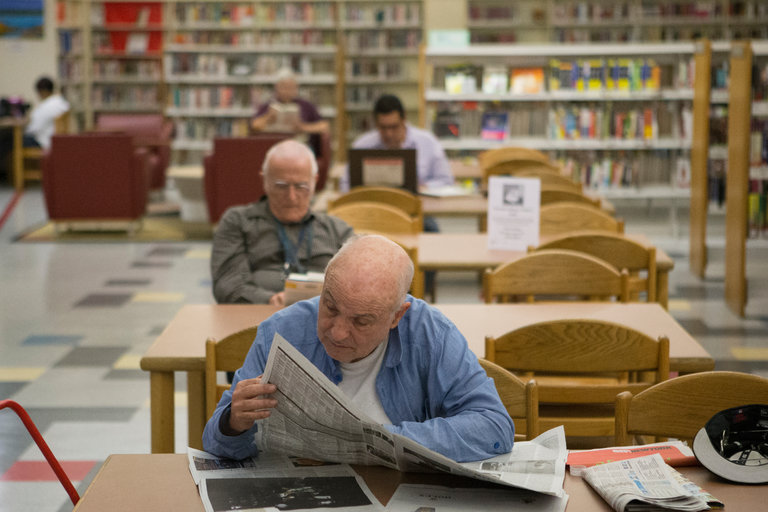 The Inwood Library in northern Manhattan is quiet, air-conditioned and open every day. Credit: Alex Wroblewski for The New York Times
July 29, 2016

THE NEW YORK TIMES— July 4, 2016 — New York City’s 217 public libraries have rebounded in the past two years amid an infusion of city dollars, after years of budget and service cuts. An outpouring of support from library lovers has served as a reminder that the institutions are a crucial part of many lives.

A recent contest to recognize neighborhood libraries underscored their vitality: 18,766 online and paper nominations were submitted in one month, up from about 4,300 when the yearly competition was started in 2013. Nearly every library was nominated at least once. Some received hundreds of nods.

One young man wrote that he was homeless when he started going to the Arverne branch of the Queens Library, where the staff not only helped him study to become a security guard but also hired him to work as a mentor to teenagers. Today, that man, Richard Johnson, has two jobs and his own apartment.

“Ever since becoming a member of the Queens Library, I have been bettering my life,” he wrote in his statement.

One of 11 videos, profiling the finalists, that were produced for the New York City Neighborhood Library Awards.

The library contest that drew so many nominations was the idea of Reynold Levy, 71, a former president of Lincoln Center and a lifelong user of libraries.

At the time, budget cuts had forced many branches to eliminate weekend hours. Mr. Levy saw the contest as a way for people to show city leaders how much they valued libraries and to express their appreciation to those who work in them. The contest was sponsored by the Charles H. Revson Foundation and the Stavros Niarchos Foundation and awarded a total of $170,000 to 11 winning libraries, including $20,000 to the Inwood branch.

Mr. Levy, the chairman of Revson’s board of trustees, recalled that his first job, at age 14, was at the Brighton Beach library in Brooklyn, where he borrowed all his books. Four days a week, he would help check out books, collect fines and troll the aisles to make sure all the edges of the books were neatly lined up, climbing on stools to reach the upper shelves. “It was a dream of mine to be wealthy enough to build a library and buy books,” he said.

The recent gains by libraries have delighted Christian Zabriskie, a librarian and executive director of Urban Librarians Unite, an advocacy and education group that organizes an annual “read-in,” in which people take turns reading nonstop for 24 hours, to support the libraries.

“In New York City, there is somebody using library materials every second, every day of the year,” Mr. Zabriskie said. “It’s showing that libraries are the fabric of society.”

Click here to read the rest of the article.