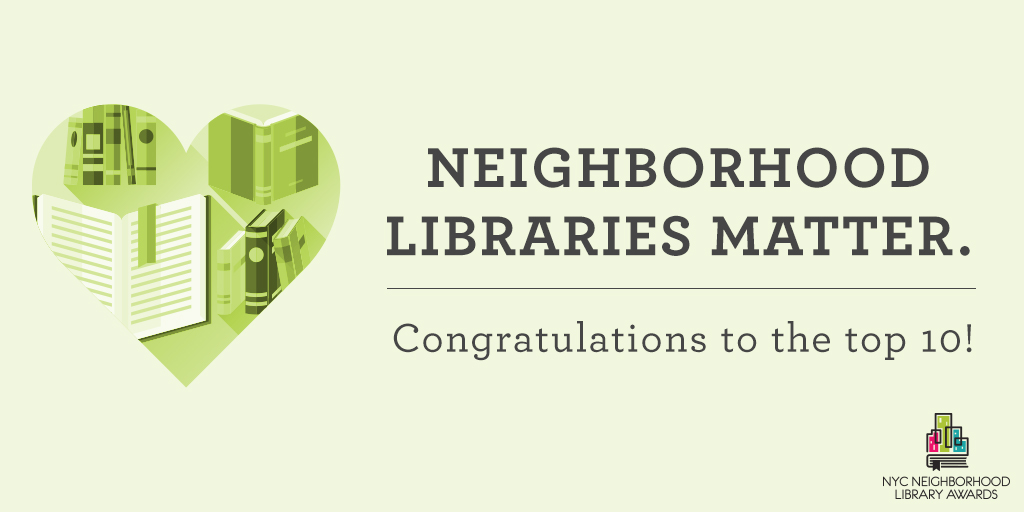 New York, NY – April 12, 2016 – The “Oscars of libraries” announced today the ten finalists for its third awards season. The NYC Neighborhood Library Awards recognize and reward public libraries for being the unsung heroes of New York – places where all are welcome, the programs and resources are free, and the librarians are making it all happen on a shoestring budget.

A group of eminent judges will pick five winning branches for the $20,000 prize. The remaining finalists will receive $10,000 each.  Winners will be announced in June.  The awards are an initiative of the Stavros Niarchos Foundation and the Charles H. Revson Foundation.

The awards generated approximately 19,000 nominations from library users. The remarkable response – up more than 40 percent from last year’s nominations– underscores the vital role that libraries play in our city and reveals the many ways in which libraries support New Yorkers in their daily lives.

Also, in a new twist this year, the Heckscher Foundation for Children will be awarding the Heckscher Prize for Outstanding Service to Children and Youth to one additional outstanding library branch that has proven their commitment to this City’s youth through special programs, classes and events. The winner of this award, to be announced with the other winners at the June awards ceremony, will also receive a prize of $20,000 to spend on their branch.

The ten finalists, accompanied by excerpts from nominations, are:

Click here to listen to the Brian Lehrer Show segment announcing the finalists!