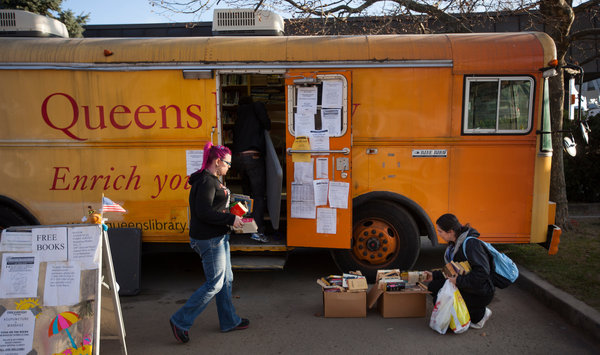 THE NEW YORK TIMES — The Rockaways still look like ghost towns. But the community libraries are there—if only in the form of a bus, parked in front of the gutted, muddy Peninsula branch. Days after the storm laid waste to four Queens Borough Public Library branches in the Rockaways, a colorful mobile library bus has hummed just outside its former location on Rockaway Beach Boulevard, offering warmth, power outlets, emergency information and books.

Nearly four feet of water had smashed through the Peninsula branch’s glass front, tearing thousands of books from the shelves and spewing them onto the sidewalk. Outside, sand, debris, glass and pieces of boardwalk covered the road, and the National Guard patrolled the streets. Recovery centers had not yet opened. So the library, a natural community center, stepped unto the breach.

“People were just wandering back and forth in shock; they didn’t know what else to do,” Joanne King, the communications director for the Queens library system, said of the first day the bus opened. “When they saw the library bus parked out there, they just burst into tears.”