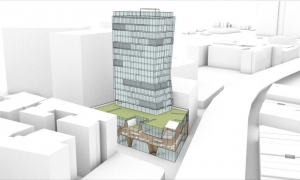 NEXT CITY — A lot of us have been walking around the city for decades and looking at libraries and post offices and all sorts of civic institutions and just thinking … there’s a great chance to do a win-win,” David Kramer said at last week’s Re-Envisioning New York’s Branch Libraries. Kramer’s a principal at NYC-based real estate developer Hudson Companies. The firm recently won the bid for the Brooklyn Heights Library Redevelopment Project, which plans a “state-of-the-art” branch in a mixed-use space, and 110-plus units of affordable housing off-site. At a time when many libraries are reinventing themselves, the Re-Envisioning event was a chance for five design teams to present ideas for the future of New York’s branch libraries.

In cities where demand for space motivates developers to look everywhere for building opportunities, and any weakness in civic infrastructure is, in some way, a chance for stamping out a new structure, the conversation around using public libraries as a neighborhood development tool can be tricky. City Councilman Brad Lander acknowledged Kramer’s approach will be key to finding a workable plan for the library systems, but noted that the conversation on libraries and community development should begin “in a way that’s not at first commodified in [square footage] and financial value.”

Beyond the potential of the city’s 207 branch libraries, and beyond sleek, modern design concepts and developer deals for affordable housing, it’s clear there’s a need to address some foundational problems in New York’s system.

Read the entire article at NextCity.org