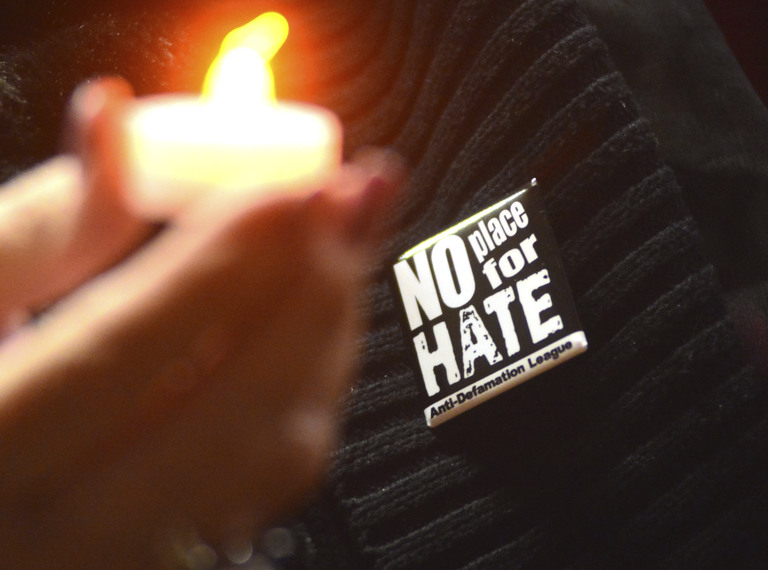 Holding votives and wearing pins from the Anti-Defamation League, about 600 attend a gathering at Knesset Israel in Pittsfield, Massachusetts, for an Interfaith Community Vigil Nov. 1 honoring the lives lost at the Tree of Life Synagogue in Pittsburgh. (Gillian Jones / The Berkshire Eagle via AP)
November 26, 2018

THE SEATTLE TIMES —  November 19, 2018 — In a story most Muslims believe authentic, the Prophet Muhammad stands up as a Jewish funeral procession goes by. His companions wonder why he shows such respect. “It is only a Jew,” they say. The Prophet replies, “Was he not a soul?”

I have mixed feelings about this story. I like its message: Everyone has a soul and should be honored. But it bothers me, too; the need to remind us that even a Jew has a soul, and must be honored, leaves me uneasy.

In the early hours of Saturday, Oct. 27, when I first learned of the attack at the Tree of Life synagogue in Pittsburgh, I felt cold shivers. I worried the attacker was a Muslim. I suppose every minority reacts with similar insecurity, because we know how blame works.

Now we know the attacker was Robert Bowers, who is not Muslim. But probably random white men of Christian origin were not asked, as if they all shared blame,   “What do you think about the attack on the Tree of Life synagogue?”

To be honest, my initial fear that the attacker might be Muslim wasn’t just an expression of an insecure minority but the result of what I know to be a real problem: the persistence of anti-Semitism in Muslim communities. Like many Muslims, I grew up with anti-Semitic attitudes, in my case in the Beyoglu neighborhood of Istanbul. I remember when, in 1986, only a few miles from my home, a terrorist killed 22 Jews at the Neve Shalom Synagogue during a Shabbat service.

Though there are fewer than 20,000 Jews left in Turkey, conspiracy theories about Jews and power were everywhere. I grew up hearing that all that had gone wrong in Turkey was because of Jews. Many believed that a secretive Jewish sect, the Dönmeh, and supposedly Jewish-controlled Masonic lodges, were behind the collapse of the Ottoman Empire. Jews also were blamed for all the misfortunes of the Turkish people, and for secular government discrimination against religious Muslims in the past.