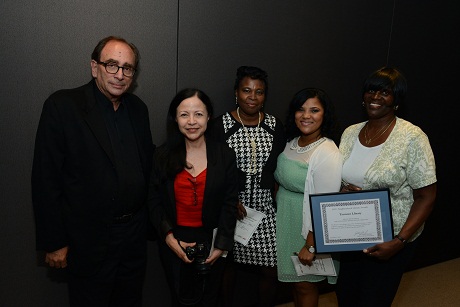 The Charles H. Revson Foundation announced the five winners of the first-ever NYC Neighborhood Library Awards, the culmination of an initiative that resulted in 4,310 nominations from New Yorkers. The five winning libraries, each of which received $10,000 at an awards ceremony in midtown Manhattan, were selected from 10 finalists by a distinguished panel of judges: R.L. Stine, author of the renowned Goosebumps series; Kurt Andersen, author and host of WNYC’s Studio 360; Carla Hayden, CEO of the Enoch Pratt Free Library in Baltimore and former president of the American Library Association; Fatima Shama, NYC Commissioner of Immigrant Affairs; and Don Weisberg, President of the Penguin Young Readers Group. The nomination process took place during a six-week period this summer and was promoted publicly with the crucial assistance of WNYC’s Brian Lehrer Show, the media partner for this initiative.

The five winning libraries are:

In addition to the five winners of the NYC Neighborhood Library Awards, the other five finalists were presented with checks for $5,000 each. Those five libraries are: Aguilar Library, Kings Bay Library, Parkchester Library, Queens Village Library, and Tremont Library.

There are over two hundred public library locations across New York City’s five boroughs. Each library plays a vital role in its community and impacts the lives of New Yorkers of all ages, income levels, and places of birth. We want to honor five of these neighborhood libraries for their outstanding dedication to serving their communities. 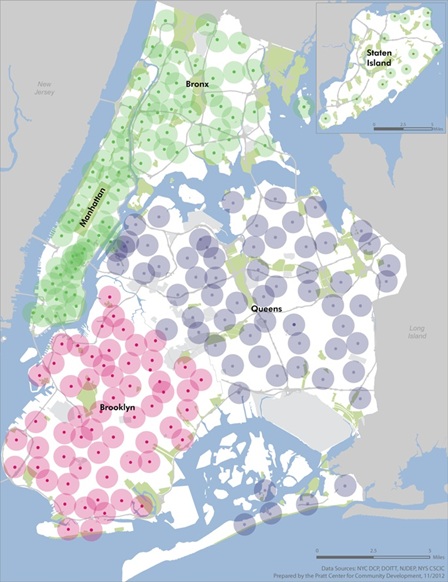 This map shows the locations of New York City’s 206 public libraries. The shaded circles, with a radius of a half mile, indicate walking distances to each library. This map was prepared by the Pratt Center for Community Development and published by the Center for an Urban Future.

Nominations for the 2013 NYC Neighborhood Library Awards are now closed. Please stay tuned for information on the 2014 Awards cycle.