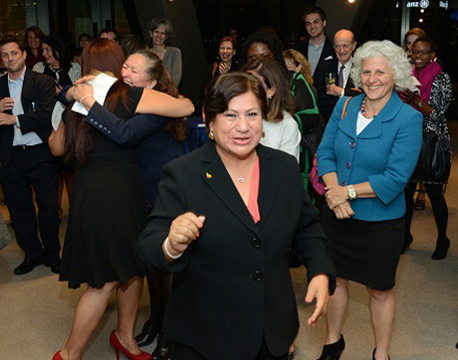 The Charles H. Revson Foundation and Stavros Niarchos Foundation, in association with WNYC’s Brian Lehrer Show, are excited to announce the launch of the 2nd annual NYC Neighborhood Library Awards! The Awards honor five local libraries for providing exceptional service to their communities. Five winning branches will receive $20,000 each, the largest cash prize awarded directly to branch libraries in the country.

From November 7th until December 12th New Yorkers can nominate their local branch library for the Award. The winning libraries will be selected based on nominations submitted by the countless New Yorkers that rely on the hundreds of branch libraries across the Bronx, Brooklyn, Manhattan, Queens, and Staten Island. Our panel of judges includes acclaimed authors Jonathan Safran Foer and Jacqueline Woodson, and Dutton Children’s Books publisher Julie Strauss-Gabel. Winners will be announced in May 2015.

Click here  to nominate a library today! Nominations can also be submitted through the websites of the Brooklyn Public Library, New York Public Library, and Queens Library, as well as in person at any branch location. Nominations are open from now through December 12th, and submissions will be accepted in Spanish, Chinese, Russian, Korean, and Haitian Creole, in addition to English. Full Awards details can be found on our website at www.nyclibraryawards.org. We look forward to reading your nominations!