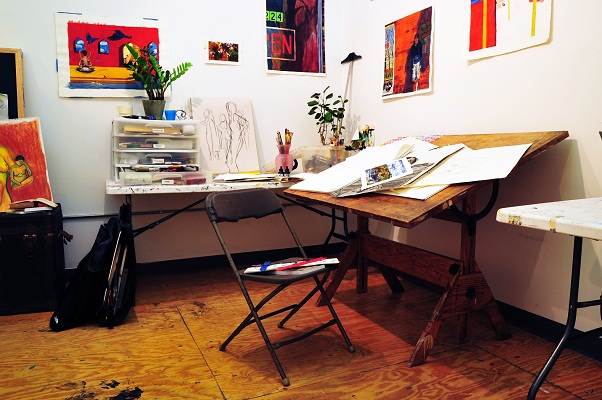 A visual artist's studio in Gowanus

Spaceworks is a nonprofit real estate organization dedicated to expanding the supply of long-term, affordable rehearsal and studio space for artists in New York City.

The arts are central to New York City’s identity, economy, and quality of life. However, the city is also one of the most expensive places for artists to live and work. For over 30 years, the cultural community has cited the high cost of real estate as the single greatest threat to New York City’s global predominance as a creative capital.

Although some cultural organizations have facilities designated for rehearsal/studio space, the availability of reliable, affordable places for developing new work is very limited. Existing performance practice space and art studios are heavily concentrated in Manhattan and several neighborhoods in Brooklyn, and private operators report full occupancy.

New York City’s cultural vitality is reliant on its capacity to serve as a center of artistic and creative production—a home for artists to make work, not just display or perform it. Supported by Revson, Spaceworks develops and rents workspaces to visual and performing artists, repurposing underutilized public buildings like libraries, warehouses, and formerly residential spaces.

At 34th Street and Skillman Avenue in Long Island City, Queens, four large rehearsal spaces are rented by the hour to music, dance, and theater artists; and two studios (each approximately 200 square feet, fully private, and accessible 24-hours a day) on President Street in Gowanus, Brooklyn were made available to visual artists, chosen via lottery, in fall 2013.

In collaboration with the Brooklyn Public Library, Spaceworks is developing rehearsal and studio space at two neighborhood libraries: the second floor of the beautiful Williamsburg branch will be home to four visual art studios and two rehearsal spaces in 2014; and the entire Red Hook branch will receive a renovation that will include two 1,000 square foot rehearsal spaces for theater and dance artists, to be completed in 2014.

A planned gut-renovation of Governors Island Building 301, a 20,000 square foot former school, is in the pre-development stage. The building—located in the Island’s Historic District, overlooking Buttermilk Channel and close to the Brooklyn ferry access pier—will eventually b