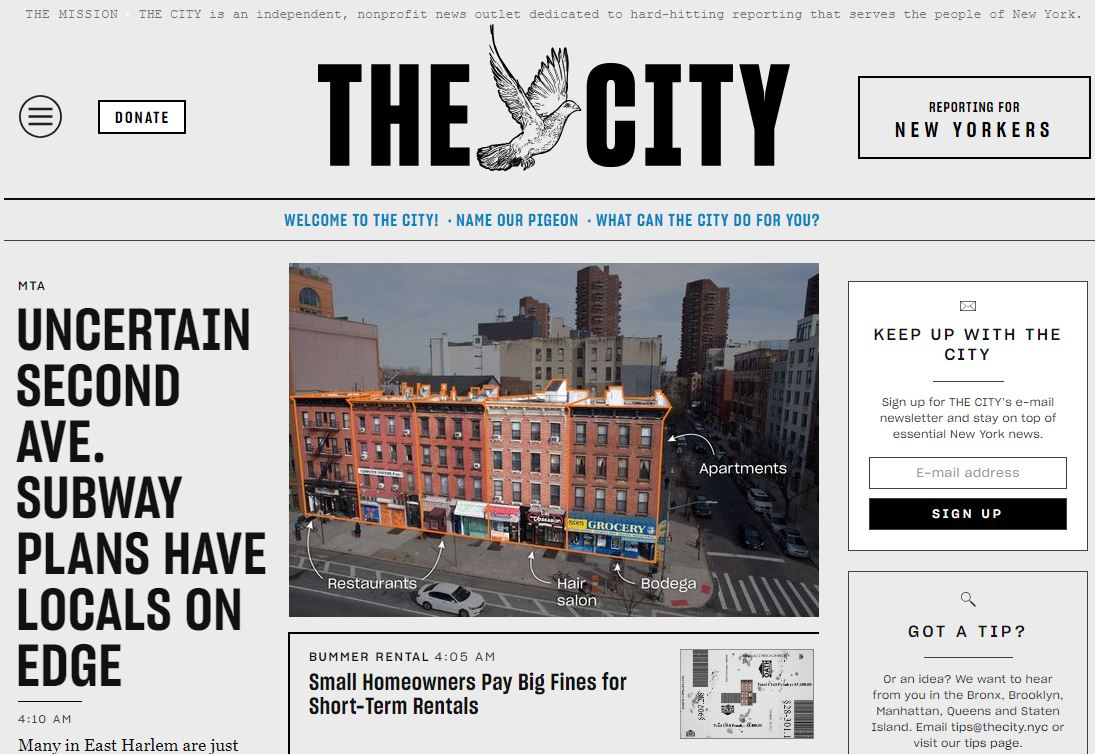 Recognizing that robust local journalism is the lifeblood of New York’s civic infrastructure, in 2018, the Revson Foundation became a founding donor of THE CITY, a new nonprofit digital news organization focused on public affairs journalism in New York City.

Incubated at the Revson Foundation, THE CITY will provide a dependable source of comprehensive local news coverage and equip New Yorkers with a working knowledge of their public institutions, communities, and the economic and social forces that affect their lives. The outlet will cover some of the most important beats in New York City including transportation, housing and real estate, climate change, healthcare, immigrant New Yorkers, and criminal justice — as well as the politics of City Hall and Albany.

As an authoritative and knowledgeable source of information in communities, local news plays a crucial role in our democracy—holding institutions of power accountable, providing communities with a common set of facts from which to approach society’s challenges, and serving as a platform for public discourse and debate. However, despite its importance, throughout the country, local news is in a state of crisis. Since 2004, twenty percent of all metro and community newspapers in the United States have gone out of business or merged and between 2008 and 2017, newspapers cut 45 percent of their newsroom employees.[1]

While a number of factors have undoubtedly contributed to the decline in the quantity of robust local news, it is clear that the business model underpinning the industry for decades—revenue from print advertising—has fundamentally shifted and is unlikely to return in the near-future. Given the industry’s importance and the need for new financial models of support, nonprofit, nonpartisan news organizations have emerged as viable additions to the news ecosystem.

As a new nonprofit news outlet with a diversified financial model, THE CITY will make its stories available to the public at no cost and will partner with other news outlets to reach broad audiences. New York Media, the parent company of New York Magazine, was the first news organization to embrace THE CITY’s mission and goals and has made its comprehensive resources and expertise available to assist with all aspects of development including the design, launch, and maintenance of THE CITY’s website. A link to THE CITY’s website appears on the New York Magazine home page.

THE CITY’s team, a mix of veteran and rising talent, will work to produce consistent, high-quality and high-impact accountability reporting, from beat-driven enterprise stories to incisive investigative reports.

Check out thecity.nyc for more information and to sign up for its newsletter!