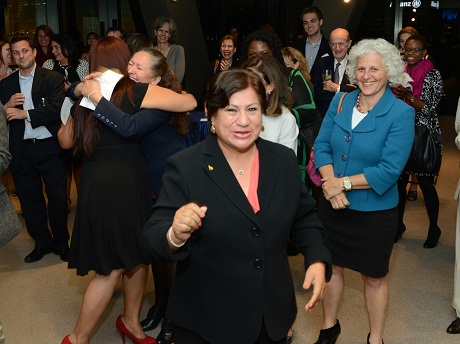 The Charles H. Revson Foundation last night announced the five winners of the first-ever NYC Neighborhood Library Awards, the culmination of an initiative that resulted in 4,310 nominations from New Yorkers. The five winning libraries,each of which received $10,000 at an awards ceremony in midtown Manhattan, were selected from 10 finalists by a distinguished panel of judges: R.L. Stine, author of the renowned Goosebumps series; Kurt Andersen, author and host of WNYC’s Studio 360; Carla Hayden, CEO of the Enoch Pratt Free Library in Baltimore and former president of the American Library Association; Fatima Shama, NYC Commissioner of Immigrant Affairs; and Don Weisberg, President of the Penguin Young Readers Group. The nomination process took place during a six-week period this summer and was promoted publicly with the crucial assistance of WNYC’s Brian Lehrer Show, the media partner for this initiative. You can listen to the managers of the winning branches discuss their work with Brian Lehrer here.

“These five libraries are truly outstanding and reflect the extraordinarily important role that neighborhood libraries play in communities all across the city,” said Julie Sandorf, President of the Charles H. Revson Foundation. “It was especially moving to see, throughout the entire selection process, the passion of the nominators and their gratitude for the often life-changing contributions of the neighborhood library.”

The five winning libraries – and an excerpt from the nominations for each – follow:

Read the entire press release here, and listen to the winning branch managers on the Brian Lehrer Show.