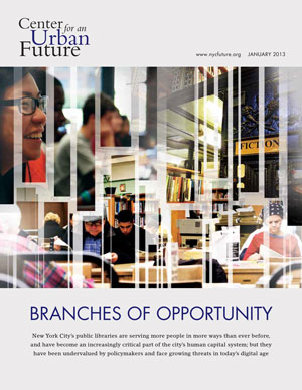 The city slashed $68 million from New York public libraries’operating budgets, according to a new report called “Branches of Opportunity” published in Januaryby think tank Centerfor an Urban Future. While the libraries receive what the reportcalls “the lions share” of their support from the city, they also depend onprivate donors.

Despite the cuts and resulting challenges, demand for libraryservices is spiking, the report found. In the last decade, circulation grewabout 59-percent and program attendance increased 4o-percent. The report alsooutlines some of the communities specifically served by a vibrant librarysystem. These populations include immigrants, seniors and students, allespecially attracted to a wide range of free classes.

“[W]e live in an information economy now,” David Giles, theresearch director at Center for an Urban Future, told MetroFocus host Rafael PiRoman. “[M]ore and more people are going to libraries to better themselvesintellectually, and to pick up the skills they need to succeed in thiseconomy.”

Continued Giles: “We’re talking about courses, sometimes intensivecourses, like GED preparation courses and ESOL courses. English as a SecondLanguage courses for immigrants, and these are free to the public and the vastmajority of people that participate wouldn’t be able to otherwise.”