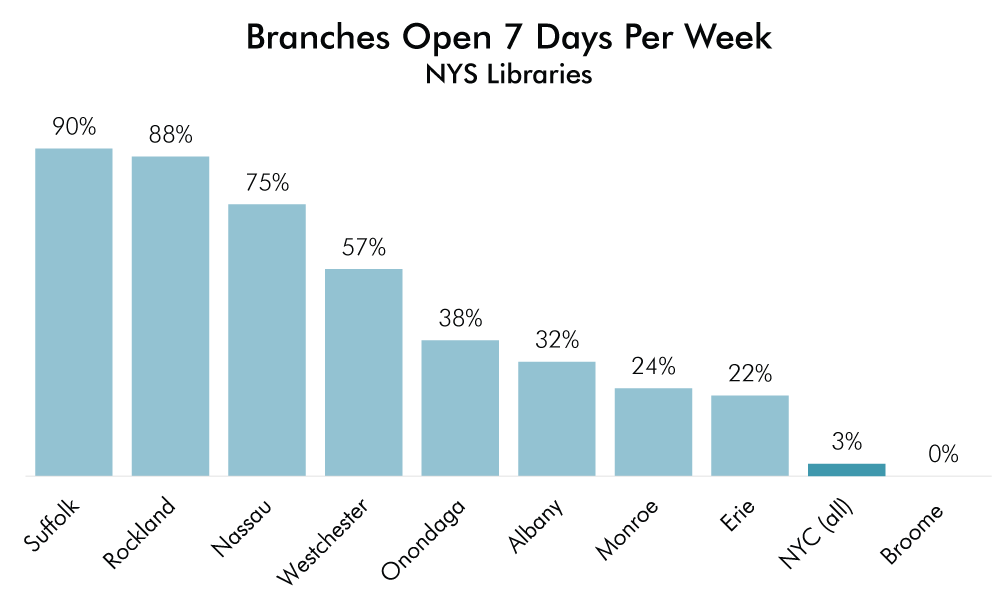 Graph courtesy of The Center For an Urban Future
April 9, 2015

CENTER FOR AN URBAN FUTURE — In Branches of Opportunity (2013), the Center for an Urban Future documented how New York’s seniors, immigrants, K-12 students and unemployed were using their public libraries, and how visits, book circulation and program attendance were skyrocketing in the age of the Internet. Every year, New York’s 207 public libraries greet more visitors than all of the city’s professional sports teams and Cultural Institutions Group members combined, but their increasing value to communities across the five boroughs has not been widely acknowledged by policymakers. Funding is still down considerably from just a few years ago, and library hours are still sharply curtailed, especially when compared to other libraries across the state and country.

Our analysis also compared New York City’s public libraries with library systems in the nation’s 10 largest cities. We find that New York’s public libraries fall into the bottom half of large urban libraries nationally when it comes to service hours. Out of the country’s ten largest cities, New York ranks 7th. Just San Jose and Houston offer fewer service hours than the five boroughs. Public libraries in San Antonio are open 57 hours per week (with 100 percent open seven days), while those in Los Angeles are open 53 hours, San Diego 51 hours and Chicago 49 hours.

Library service hours are an enormously important barometer of their effectiveness. When libraries have to close early in the evening and on the weekends, fewer working families are able to take advantage of their resources, including not just books but classes and workshops. As Mayor de Blasio and the City Council negotiate a new budget, bringing the city’s library hours more in line with their peers across the state and country should be a high priority.