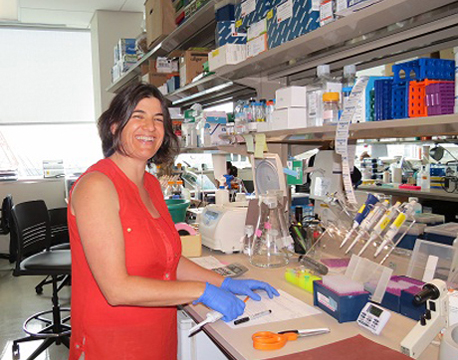 When Israel’s premier scientific research center, the Weizmann Institute of Science, realized in 2003 that only 13% of its active faculty were women—despite the fact that women make up half of those to whom the Institute grants PhDs—Weizmann’s leaders knew they needed to take steps to address the disparity.

Research and interviews revealed that when women scientists reach the point in their careers at which they are expected to go abroad for postdoctoral training—a requirement for a tenure-track research position in Israel today—many choose to abandon their academic careers. The problem was not limited to Weizmann but widespread throughout Israel.

For most Israelis, university is delayed by several years because of mandatory military service after high school. In addition, Israeli women tend to have children earlier than their American peers. By the time many of these scientists receive their PhDs, they have already started families. A prestigious postdoctoral fellowship award is often not enough to outweigh the challenges of relocating to a foreign country—interrupting a partner’s career and uprooting young children—for up to five years on what is often a single salary.

In response, Weizmann developed the Postdoctoral Program for Advancing Women in Science, which offers awards of $20,000 a year for two years to Israeli women scientists who have already received a merit-based postdoctoral fellowship offer from abroad, to supplement their fellowship salaries. The program is competitive; there are between 50 and 60 applicants for about ten slots a year. Since 2009, Revson has supported awards for fifteen outstanding scientists. With the Charles H. Revson Senior Fellows in Biomedical Science, Revson’s Weizmann Fellows attend an annual meeting and dinner during which they have the opportunity to meet and present their work to one another and to Revson staff and board members.

Twenty-two women received Weizmann awards between 2007 and 2010: twelve are now in faculty positions at Israeli universities, and two are employed in Israel’s high-tech industry. Of the remaining eight, three have jobs at American universities and five are still completing their postdoctoral studies. Both Weizmann and Revson consider these numbers a heartening success and believe this program can serve as an easily tailored model that could be adopted by top-tier institutions in other countries.

Learn more about the Program for Advancing Women in Science on the Weizmann Institute’s website.