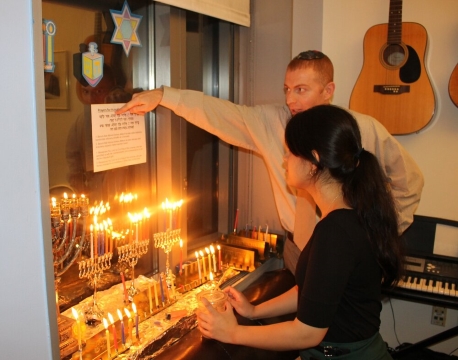 The City University of New York (CUNY), with the largest Jewish undergraduate population of any university in the country, is a powerful engine of social mobility for all New Yorkers. The five Hillels affiliated with CUNY help to drive that engine for current Jewish students, providing them with enrichments and social capital that are the norm at private and residential colleges.

Revson supports the Hillel at Hunter College and the Hillel at Baruch, which also serves the students of City College, John Jay College, Pace University, Fordham University, the Fashion Institute of Technology, the New School and the School of Visual Art. Jewish students attending these schools are predominately first-generation Americans and/or first-generation college students from Russian, Syrian, Persian, Latin American, Israeli, Bukharian, Modern Orthodox, and formerly Orthodox homes in neighborhoods that were among those hit hardest by COVID-19.

Hillel staff members help students to navigate the pressures that accompany being an immigrant and/or first-generation college student, supporting their personal wellbeing, academic success, and professional development to become graduates with strong ties to the Jewish people. Their short-term investment in Jewish students at CUNY is also an investment in the future of New York City and the Jewish community.