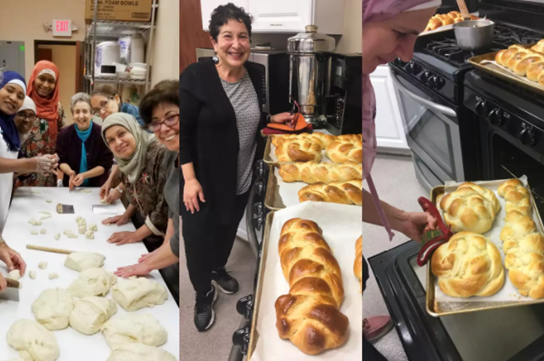 Sisterhood chapters bake bread for the homeless and hospitals as acts of Tzedakah/Sadaqa: of service and justice.

The Sisterhood of Salaam Shalom builds relationships of trust and respect between Muslim and Jewish women and teens to help them take shared steps against bigotry.  Women start out as strangers to one another, develop friendships and become Sisters who stand up for one another, educate one another about their faith and cultural practices, and engage in social action to end incidents of hate.

From its origins as a small group that met in New Jersey living rooms, the Sisterhood is now a network with over 3,500 active members and 140 chapters nationwide and in Berlin. Chapter members study together, engage in acts of service, and take steps to fight bias in their communities.

During the pandemic, the Sisterhood opened its tent further and expanded programming; participants in its social media groups now number over 8,000. In 2019, the Sisterhood was one of ten global grassroots organizations to receive a prestigious Intercultural Innovation Award from the United Nations Alliance of Civilizations (UNAOC) and the BMW Group. Its work is depicted in the documentary “Stranger/Sister” released in 2020.

Political extremism continues to result in threats to both the Muslim and Jewish communities. The Sisterhood of Salaam Shalom helps its members to develop skills and build strong bonds to meet challenges together.